The Earth as a “Mosque” 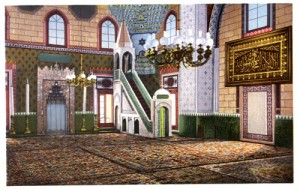 The Earth as a “Mosque”

The Prophet (pbuh) has said that the whole earth was created as clean and pure (tahur), and as a place of worship, or a mosque (masjid), to him and his followers. Consequently, he used to offer his prayers wherever they were due, and he would pray even in sheepfolds. The Prophet (pbuh) was once asked about praying in places where the camels lie down. He replied: “Do not offer prayers in places where the camels lie down. These are the places of Satan.” He was asked about praying in the sheepfolds. He replied: “You may offer prayers in such places; these are the places of blessing.” That the earth has been made clean and a mosque to Prophet Muhammad (pbuh) and his followers, such is one of several favors which from among all the prophets have been bestowed only upon the seal of prophets, Muhammad (pbuh).
With the exception of a few places, such as the places where camels lie down, graveyards and impure places, the whole earth Islam sees as a mosque. Muslims thus can pray virtually anywhere wherever the times of their prayers overtake them. The small exceptions mentioned above are due to the inherent pure state of earth being altered by certain occurrences and actions related to man or Satan. Otherwise, the earth – in principle – is entirely pure and clean, having been created but to worship its Creator and to be of service to man.
Not only that Muslims can pray everywhere on the earth, but also they can use some of its elements for purification purposes against the biggest of impurities, not counting water, of course. For example, tayammum, or the dry ablution, can be performed using sand or dust in place of ablution (wudu’) or ghusl (ritual washing of the whole body) if no clean water is readily available. Also, solid, dry and uprooting stones can be used for cleaning the private parts after urinating or defecating, although water is the best and most effective agent. This is so – perhaps – because man’s body is created from the earth, as revealed by Allah the Creator. His very self and the earth are not strangers to each other. Man’s body comes from the earth, lives on, and with, it, and at the end, it returns to the earth. Every person returns to the earth from which he has been made.

As a result, the departure of a believing person from this world is marked not only by people, especially believers, but also by the rest of the members of the earthly community and its global mosque. Evil persons, quite the opposite, are not grieved over. With regard to this, the Prophet (pbuh) has said that when a person who rejects obedience to Allah passes away, human beings, land, animals and trees get a moment of respite from him and his wicked actions. Based on this we can reason that when a dutiful servant of Allah passes away, the same creatures feel disheartened knowing that they have just lost a member and his pervasive benevolence.
The Prophet (pbuh) has also said that for every person there are two doors in the heavens: a door from which his sustenance comes out and a door through which his deeds and words enter. When a (good and obedient) servant of Allah dies, these two doors grieve for him and weep. However, in case of a bad person or a person who rejects obedience to Allah, neither the heavens nor the earth sheds a tear over him when he dies, as no good deeds or words were coming from him. As such, no worthy traces or effects could he possibly leave behind on the earth, and no good deeds were going through his personal gate in the heavens.
The Prophet (pbuh), furthermore, has said that the heavens weep because of a person to whom Allah gave a healthy body, an ability and ample means to enjoy eating and drinking, as well as a comfortable life, but he behaves unjustly towards people. The Prophet (pbuh) described such a person as violent, cruel and wicked.
And finally, the Prophet (pbuh) has said that when people observe a religious standard, or a restriction (hadd), such is dearer to the inhabitants of the earth than that rain is sent forty consecutive mornings upon them.
While erecting mosques for themselves, in order to encourage and facilitate a wide spectrum of their sanctified earthly commitments, Muslim believers know that what they do is just a mirror image of what the fundamental nature of the earth is really like. What they do, moreover, connotes just an act of total compliance with the spiritual laws and paradigms that govern the whole kingdom of terrestrial existence. The reality and mission of people’s mosques symbolize the reality and mission of the global earthly mosque. Muslim believers’ vibrant lives of comprehensive worship that center round the mosque phenomenon symbolize the equally vibrant lives of worship realized by the rest of the earth’s life forms. People’s mosques are an extension of the domains of the earthly mosque. Muslim believers’ pious lives are an extension of the domains of the pious lives of the rest of the earthly creatures with which believing men and women peacefully interact at different levels of their presence. Indeed, a believer is a microcosm of the earth. What is more, he is a microcosm of the whole universe and the whole existence.