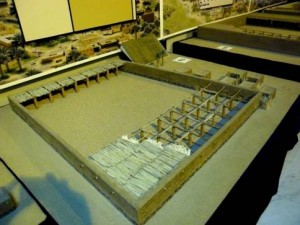 An imaginary initial simple form of Prophet Muhammad’s Mosque. Courtesy of the Hadarah Tayyibah Exhibition held in Madinah in 2010-2012.

An imaginary form of Prophet Muhammad’s Mosque after caliph ‘Umar b. al-Khattab’s extension. Courtesy of the Hadarah Tayyibah Exhibition held in Madinah in 2010-2012.

After ‘Umar, ‘Uthman b. ‘Affan became caliph. He too decided to rebuild and enlarge the Prophet’s Mosque in Madinah. He did so for much the same reasons as before, i.e., the fast decay of the ephemeral building materials used, as well as sharp increase in the number of worshippers. However, caliph ‘Uthman decided to introduce some new building materials and apply somewhat a new building technology hitherto uncommon in mosque architecture, which, however, was not welcomed by everybody. Before proceeding with the job, ‘Uthman consulted the people, some of whom had their misgivings about changing the Mosque’s rudimentary structure. The arguments of those who amicably opposed ‘Uthman’s plan were based on conviction that the Mosque ought to be either left as it is or be subjected to no more than some unavoidable renovation work, which was the practice of the first two caliphs, and to retain its simple and unpretentious original look.
Caliph ‘Uthman, on the other hand, contended that the existing Mosque’s structure outlived its usefulness. It was prone to fast deterioration, so he wanted to tear it down and erect a new solid, durable and comfortable structure in order that the activities customarily carried out therein could be executed in a smoother manner and without much obstruction or disturbance by some environmental elements. To build the Mosque in the same way as his predecessors had done — ‘Uthman must have reasoned — would have meant that his successors, too, would not be spared spending much of their priceless time and limited resources on meeting the effects of the susceptibility of the Mosque’s fabric to fast decay and ruin. In addition, ‘Uthman was determined to improve the physical condition of the mosque also because the state treasury was like never before filled with the riches amassed from the ongoing conquests. Everyone acquired some legitimate wealth in one form or another. As a result, many Muslims soon started building houses with hitherto unthinkable designs and sizes. The people also enjoyed good attire, good food and good entertainment within the religious confines. Accordingly, it appeared unfair to the Muslim leadership that the Prophet’s Mosque situated in the heart of the capital of the flourishing state was left lagging behind in mirroring Allah’s abundant boons and blessings bestowed on the Islamic community which, however, many other life aspects unselfishly did.
To reconstruct the Prophet’s Mosque as proposed by caliph ‘Uthman eventually became a decision to which everybody consented. The Mosque was enlarged considerably: it was 160 cubits long and 150 cubits wide. Its walls were built with incised stone and plaster; so were the columns. The roofing was extended and elaborated with teakwood. The whole enterprise lasted approximately ten months.

An imaginary form of Prophet Muhammad’s Mosque after caliph ‘Uthman b. al-‘Affan’s extension. Courtesy of the Hadarah Tayyibah Exhibition held in Madinah in 2010-2012.