The Universe as a “Mosque” 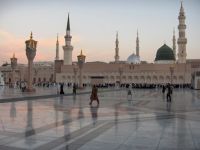 The Universe as a “Mosque”

Islam is a religion that inevitably leads to the creation of a virtuous comprehensive culture and civilization which benefits not only Muslims, but also non-Muslims and all the other worldly creatures as well. Islam also creates individuals who through a complex hierarchy of institutions and establishments are organized in a community (ummah) which is well equipped to meet the challenges of its and its members’ earthly mission. This is so because life in its totality is seen as both the field and a form of worship (‘ibadah) in Islam. Every life activity believers effortlessly transform into an act of worship. Every part of the earth where they live, believers, as a result, turn into a vibrant place of worship as well. They turn it into a mosque (masjid). Thus, Islam, believers, worship as a lifestyle, and the notion of the mosque, one originating from the other and each one needing the others for its functioning and continued existence, are inseparable.

As a matter of fact, the earth is just a part of another more expansive mosque (a place of worship), that is, the whole of the universe. The Holy Qur’an repeatedly asserts that everything in the universe: the sun, the moon and all the stars, including the earth itself, incessantly glorifies, sings praises and prostrates itself to Allah, the Creator, Master and Sustainer. A hint as to the way in which Allah created the heavens and the earth and how obedient and devoted they are, Allah says: “Then He turned to the heaven when it was smoke, and said unto it and unto the earth: “Come both of you, willingly or unwillingly.” They said: “We come, obedient.” Then He ordained them seven heavens in two periods and inspired in each heaven its duty and command; and We adorned the lower heaven with lamps, and rendered it inviolable. That is the measuring of the Mighty, the Knower.” (Fussilat, 11, 12)

“To Him belongs every being that is in the heavens and on earth: all are devoutly obedient to Him.” (al-Rum, 26)

By the universe and its numerous worshippers, we do not mean only the celestial planets, stars and other objects, but also all the physical unintelligent living things therein. It is exceptionally interesting that Allah in His Qur’an is explicit about this aspect of His creation. He says: “And one of His signs is the creation of the heavens and the earth and what He has spread forth in both of them of living beings (dabbah); and when He pleases He is all-powerful to gather them together.” (al-Shura, 29)

Abdullah Yusuf Ali commented on this verse as follows: “Life is not confined to our little planet. Though no scientific demonstration is possible, it is reasonable to suppose that life in some form or other is scattered through some of the millions of heavenly bodies scattered through space. What a wonderful sign of Allah! The Almighty Who created such countless beings has surely the power to bring them together.”

We assert – and Allah knows best — that those faithful and obedient life forms scattered through space, which render the universe a place of worship (mosque), are unintelligent, in the sense that they are dissimilar from and cannot possibly rival man, because the presence of man for whom, and because of whom, the universe has been created, is confined to the planet earth alone. This has been explicitly and in various contexts divulged by Allah, the Creator, time and again in the Qur’an. He said, for example: “Behold, your Lord said to the angels: “I will create a vicegerent on earth.” (al-Baqarah, 30)

We also cannot but contend that those extraterrestrial life forms are physical, which exclude angels and jinns who are spiritual beings, because the word used in the verse quoted above is “dabbah” which normally means any type of animals, or mammals and reptiles that crawl or walk on two or four legs. Allah says: “And Allah has created every animal (dabbah) from water: of them there are some that creep on their bellies; some that walk on two legs; and some that walk on four. Allah creates what He wills for verily Allah has power over all things.” (al-Nur, 45)

The universe, thus, is replete with “aliens” which may or may not be similar to what exists on the earth. However, those “aliens” are non-human and, in all likelihood, unintelligent animals. Their forms, lifestyles and the environments in which they subsist have been designed in such a way that they perfectly suit and support each other. As another possible hint at this remarkable truth, Allah says that He creates many other things, apart from what is known to man, of which man has no knowledge whatsoever. (al-Nahl, 8) Allah also affirms that of knowledge it is only a little that has been communicated to man (al-Isra’, 85), and regardless of what his achievements and discoveries might ever be, man will never be able to triumph over this inborn “ignorant” state of his.

Besides, to the virtually infinite kingdom of the heavenly mosque (a place of worship) we can also add the world of angels many of whom, although spiritual beings created from light (nur), reside in the heavens and some even on the earth due to a number of assignments given to them by Allah. They by nature endlessly worship Allah never experiencing any deficiency or fatigue in their total and incessant devoutness. They are Allah’s most obedient servants who are unable to err. The Prophet (pbuh) has said that in the earthly heaven (al-sama’ al-dunya) there is no space as big as a span of a hand, which is vacant. It is all occupied by angels who continuously and in different postures worship Allah.

The Qur’an makes a reference to the al-Bayt al-Ma’mur (the Oft-Frequented House) (al-Tur, 5), or the seventh heaven’s holly mosque or the Ka’bah, of which the Prophet (pbuh) also spoke. The following is an extract from Ibn Kathir’s commentary of the Qur’anic verse in which a reference to the al-Bayt al-Ma’mur has been made: “In the two Sahihs (the Sahihs of al-Bukhari and Muslim) it is confirmed that the Messenger of Allah said in the Hadith about al-Isra’, after ascending to the seventh heaven: “Then, I was taken to al-Bayt al-Ma`mur. It is visited every day by seventy thousand angels who will not come back to visit it again.” The angels worship Allah in al-Bayt al-Ma`mur and perform tawaf (circumambulation) around it just as the people of the earth perform tawaf around the Ka`bah. Al-Bayt al-Ma`mur is the Ka`bah of those who reside in the seventh heaven. During the Isra’ journey, the Prophet (pbuh) saw Ibrahim al-Khalil, who was reclining with his back on al-Bayt al-Ma`mur. It was Ibrahim who built the Ka`bah on earth, and surely, the reward is compatible with the action. Al-Bayt al-Ma`mur is parallel to the Ka`bah; every heaven has its own house of worship, which is also the direction of prayer for its residents. The house that is located in the lower heaven, is called Bayt al-`Izzah.”

The Prophet (pbuh) has also said that the earthly Ka’bah was built directly under the heavenly al-Bayt al-Ma’mur. If the latter falls, it would fall directly on the former. Such is the arrangement between the two holy mosques, or Ka’bahs, that despite the constant movement of all the heavenly bodies, including the earth, the two mosques always remain one above the other. Prophet Adam too is said to have worshipped Allah in the al-Bayt al-Ma’mur prior to his descent to the earth.

In this context we can also mention the world of jinns, many of whom are believers, and who constantly roam the earth and the heavens for different reasons. They are made from fire (nar). The believing section of jinns, though spiritual beings, certainly helps in rendering the universe an infinite and a very amazing and complex place of worship, or a mosque.

In addition, Prophet Muhammad (pbuh) has been sent to convey Allah’s final revealed message to both men and jinns. In the Qur’an there is an entire chapter dedicated to jinns. It is called “al-Jinn” (jinns).

Indeed, by all these and other similar Qur’anic truths about existence, believers have been invited to constantly reflect on their surrounding earthly and heavenly realities in order to try to comprehend them and their own position in the matrix of creation, and to try to comprehend the nature and framework of their relations with the other protagonists of life. They are thus to always grow, to be optimistic and visionary. Being passive or static is uncharacteristic of them. Believers’ growth starts from their private domestic mosques, and via the neighborhood, jami’ and the earthly mosques, it culminates in the highest levels of spiritual meaning and experience, a state which transcends their physical contexts dominated by the time and space factors. These are typified by the nature and expanse of the heavenly mosque which extends as far as the furthermost frontiers of the phenomenon of creation and towards which everything earthly aspires and aims. The supreme heavenly mosque signifies the limitless potentials of the truth and its seekers, as well as that there are neither insurmountable obstacles nor unreachable goals in a believer’s quest for enrichment, success and growth. Even the sky does not constitute the limit. Believers aim higher than that.